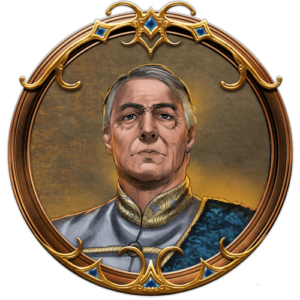 Governor Hellwig Johann von Gustavus is a legatus in the Imperial Army and serves the Empire as Governor of Niessia. He is married to Irmgard von Gustavus, and his son, Reiswitz von Gustavus, serves under his father’s command as legatus of the 10th Legion.

Early Years. Hellwig, a human, was born in Year -25 to Lord Johann von Gustavus and his concubine, Sofia. Johann was a stern, domineering father, prone to violence and excess. At an early age, Hellwig decided that if his family was to have a prosperous future, it was up to him to achieve it.

Early on, he distinguished himself with tutors in his reading, writing, numbers, and history, forming a solid foundation for future leadership. At age twelve, he escaped his violent home life by cleverly maneuvering his father into thinking it was his idea to have young Hellwig serve as squire under Sir Dipold, a knight known for some success in fighting the Somacians.

Under Sir Dipold, Hellwig flourished as he reached manhood; he was knighted at age sixteen after a particularly successful battle in Somacia in which Hellwig, Dipold, and a handful of footmen were ambushed by enemy horsemen.

Early Military Career. Shortly after Hellwig was knighted, Hesse made peace with Somacia. Hellwig was eager to see more action, but Hesse was at peace for the first time in many years. By this time, Marcosta Kordaava was gaining international recognition for his conquest of Roosh and for negotiating an alliance between Roosh and Latium. In Year -8, Kordaava addressed the nobility of Hesse during a diplomatic visit and made a call for able-bodied warriors to join his military.

He applied to the Contubernium in Latium, where Kordaava himself had received his formal training, but Hellwig’s father refused to support his son’s application to a foreign military school. Thus, Hellwig’s application did not have the necessary seal of nobility, and his entrance was denied.

In Year -6 Kordaava’s new Latium/Roosh army was reorganized and began its war of conquest, providing a new avenue of opportunity for Hellwig. Kordaava announced that his army would accept foreign military units or mercenaries as auxilia support units for his legions. Two years later, with Kordaava’s economic backing, Hellwig landed in Saratof with a force of 10 Hessen knights and accompanying horsemen, a total force of 500 men. He called his small force The Hecks.

Hellwig correctly assessed he would have more opportunity to participate in battle if he commanded a cavalry unit. This turned out to be a very astute determination, for Hellwig was able to engage in several important battles, and by the time Tamica was conquered, Hellwig and Kordaava knew each other well.

In Year -2, Kordaava called Hellwig to his command tent and presented him with an acceptance letter to the Contubernium, the military school that had denied Hellwig’s admittance six years earlier. As Kordaava noted, “Clearly, an oversight.”

Imperial Military Career. With Kordaava’s recommendation and a distinguished military experience, Hellwig was put quickly through officers training at the Contubernium, graduating just weeks after Kordaava’s coronation as Emperor of Chaldea.

Several months later, during the Battle of Akkadia, Legatus Wernuir nearly lost the legion when he underestimated the Akkadians, a female-dominated society ruled by priestesses of Ishtar. Although their soldiers were primarily male, Akkadia’s commanding officers were women. The elite veterans of Kordaava’s army, having successfully taken the continent of Tamica, assumed the battle would be a simple mop-up operation.

During a reckless frontal assault of the Akkadian capital of Eriku, the 1st Cohort was defeated by the Akkadian army, who killed Legatus Wernuir in the process.

Without waiting for permission, Hellwig risked everything to assume command of the 10th Legion. He put his experience as an auxilia commander to use by making good utility of the 10th’s auxilia units, including (ironically) a veteran Somacian cavalry force. With the Somacians providing sufficient cover, Hellwig rallied the remaining cohorts, saved the legion, “took the hill”—and then took Eriku itself the next day.

Kordaava arrived in person just in time to see Hellwig’s victory. On the field of battle, with the nobility of Akkadia in chains as witnesses, Kordaava promoted Hellwig to legatus of the 10th Legion.

Governor of Niessia. Over the next few years as Kordaava continued his conquests of Chaldea, Hellwig and the emperor became close friends. And because of continuous outbreaks of civil unrest on the continent of Niessia, the entire continent was placed under Hellwig’s governorship.

Family. Hellwig’s wife, Irmgard, is from a wealthy mercantile family who wanted to see their daughter married into nobility. Unfortunately, their marriage is not known for its tenderness, and Irmgard lives in the family estate while Hellwig lives at Enchantments Guard.

Hellwig and Irmgard have one child, a son, Reiswitz Georg von Gustavus.

Wargaming. Hellwig enjoys some fame as an Einvigi master. He and his son play regularly and have designed a number of Einvigi variations.

POSITION/TITLES
Governor of Niessia
Legatus of the 10th & 17th Legion

ORGANIZATIONS
Member of the Hessen
House of Lords 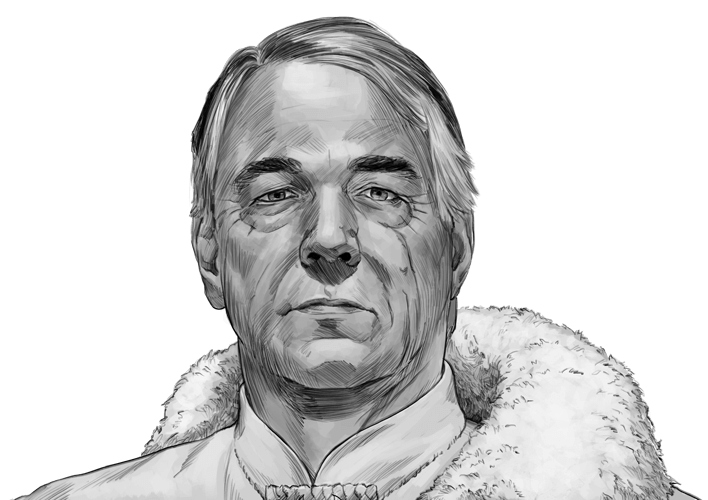