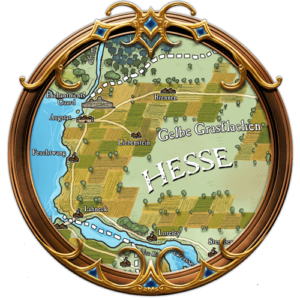 Hesse is a well-developed coastal kingdom that spans the Gelbe Grasflachen plains from the Cloudforger Mountains and the badlands of Somacia westward to the sea. It is bordered by the Garnon Forest to the north, Tavja to the northeast, Somacia to the east, Himyar to the southeast, Munchkein to the south, and the Great Sea to the west. It also controls Tetonique, a rugged wilderness colony far to the south.

Population. Hesse’s capital city of Augstat is the largest trading port of Niessia after Ugarit, Argos, and the Nabatean Trade Cities. Significant towns include Castran, Brinnen, Guthen, and Wittenburg. The population of Hesse is primarily Hessen humans.

Government. The government of Hesse is a monarchy led by Konig Gerhard von Rusdorf, but the power of the royalty and aristocracy is limited. Since the rebellion against the Kordavan Empire in Year 5, Hesse—along with several other kingdoms of Niessia—has been ruled through Imperial Governance by Governor Hellwig Johann von Gustavus.

Military. Imperial dominance is secured by the 10th Legion led by Legatus Reiswitz von Gustavus, which is stationed near the capital in the old dwarven fortress Enchantments Guard.  The indigenous military is an aggregation of knight orders called the Hecks. These knight orders are not only Hessens but include orders from Munchkein, Stollhofen, and Tetonique.  The 10th Legion and the Hecks are bolstered by various auxilia units from across Chaldea, notably Ardayan camelry and Hakhamanesh “Thunder” cavalry.

Ethnicity. The people of Hesse are mostly of the ethnic group called Hessens, who are also the dominant ethnic peoples of Munchkein and Stollhofen. Like most humans of Chaldea, Hessens were brought to Chaldea by the elder dragons during the Claw Hammer War approximately 1000 years ago. More specifically, Hessens were brought from the world of Mag Mel, the same home world of the Perts of Perrin and the Aimians of Aimilliuse and Frankia. In charitable times, Hessens might regard the Perts and Aimians as distant cousins.

There are also minority populations of halflings and outcast dwarves in and around the capital city of Augstat, Ardayans near the border of Himyar, and Tavjans near the Tavjan border.

Economy & Currency. Hessens are excellent metalsmiths, farmers, herders, and ranchers and are major exporters of metal works, cloth, and pork. They are also good at glassmaking and thus export glass; further, Augstat hosts a small but lucrative trade of rare herbs and arcana ingredients collected by gravers and herbalists in the Garnon Forest.

The coin of Hesse consists of the silver pfennig, the silver half-groschen (5 pfennigs), and the silver groschen (10 pfennigs). Hesse holds a second-tier economic trade status with the Kordavan Empire with a discount rate of 70 percent when trading with Imperial accounts.

Tetonique. Hesse’s colony of Tetonique is the southernmost kingdom of Niessia, stretching from the orc empire in the Divinity Mountains westward through the Seaxe Forest to the Great Sea. Tetonique’s economy is based primarily on cattle ranching. While not a significant contributor to the overall economy, Tetonique enjoys some tourism from would-be big game hunters who hunt dinosaurs in the Awbrian Jungle.

Diaspora. As was typical of most mercenary populations, the end of the Claw Hammer War resulted in a diaspora of Hessen people throughout Chaldea. The majority of Hessens who survived wars with other humans, orcs, and so on came together in the southern portion of the Cloudforger Mountains in present-day Tavja.

Early Statehood. Around Year –720 the first konig arose to unite these Hessens into true statehood in the form of Lothar von Braunschweig. Lothar ruled for 18 years, long enough to establish the Hessens into a legitimate state, which was called Bavarii. All the various Hessen kingdoms of current time trace their history back to this time and place.

Migration. Lothar was deposed violently by a rival chieftain, Tarter von Rusdorf. Under Rusdorf’s rule, Bavarii declined in power and cohesiveness. In a subsequent war with the Tavjans, the Hessens were driven out of the Cloudforger Mountains into the Gelbe Grasflachen, the barely fertile plains that stretched west from the mountains to the Great Sea. These plains were controlled by the Andals, who were winning the early contests of warring states and had established a coastal kingdom that stretched from Mantis on the northern side of the Garnon Forest and south to the Seaxe Forest, including the coastal regions of the present-day kingdoms of Andalus, Hesse, and Munchkein.

Over the coming centuries, the Hessens drove the Andals out of Niessia, although it had to rebuild its status as a viable state. The earliest mention of Augstat was in Year –680, as a fishing village near the ruins of Durstock and as a supply village for a Hessen tribal chieftain who had miraculously taken Enchantments Guard from the various dwarven refugees gathered there.

Statehood Once More. The Hessens once again achieved statehood when Hansel von Augstat united the Hessen tribal chieftains of the Gelbe Grasflachen and reformed the feudal order proposed by Braunschweig back in the romanticized era of Bavarii. Von Augstat named the newly reformed Hessen kingdom Hesse, with his home of Augstat as its capital, in Year –540.

Unification. The benefits of feudal statehood gave Hesse a significant advantage over the Hessen tribal chieftains to the south. Slowly but surely these tribes were assimilated, and by Year –400, Hesse ruled all the lands formerly controlled by the Andals from the Garnon Forest to the Seaxe Forest. Over the next couple of centuries, a robust aristocracy arose, centered on feudal land ownership structures and knight orders throughout Hessen society.

Civil War. Around Year –250, Hesse descended into a long and bloody civil war that lasted nearly a century. In Year –168 a treaty—the Peace of Kofin—led to the dissolution of Hesse into the three present-day kingdoms of Hesse, Munchkein, and Stollhofen. This civil war was caused primarily by rivalries in the great knight orders and bitterness among the dwarves of Stollhofen regarding the ongoing occupancy of Enchantments Guard by Hessens.

Other Conflicts. Since Hesse was formed in Year –540, Hessens have survived several conflicts with the Tavjans and the Somacians, both of whom regularly razed Hessen lands; two wars with the Ardayans of present-day Himyar; a second war with the Andals over their colony in Salominica; and a war with the Perts over their settlements in Tetonique. Of course, these wars cost countless lives and damage to the economy, but the Hessens always managed to rebound and retake lost land. These conflicts also helped the Hessens develop a strong military tradition.

Tetonique. Overwhelmed by the costs of maintaining and defending Tetonique, the Perts sold the colony to Hesse in Year –72. The Hessens subsequently sent all the Pert landholders back to Perrin and established its own gentry class by parceling Tetonique and granting its lands to a hungry Hessen aristocracy.

Kordavan Empire. Due to indecision based on fear and a grudging respect for Kordaava, the Hessens were late to the party in mounting a defense against Kordaava’s bid for the empire.  Kordaava took Enchantments Guard, which he called “the keystone of control over western Niessia,” in year –2.

Hesse, Munchkein, and Stollhofen allied in a rebellion against Kordaava in year 5. This rebellion was systematically crushed by the 10th Legion, backed by Ardayan “Trinity” camelry and Hakhamanesh “Thunder” cavalry, starting with Hesse itself, based out of nearby Enchantments Guard.

Hellwig Johann von Gustavus, an avid supporter of Kordaava and a hero of the recent Imperial conquest of Akkadia, was appointed governor of Hesse and the entirety of the continent of Niessia by Emperor Kordaava in Year 7. 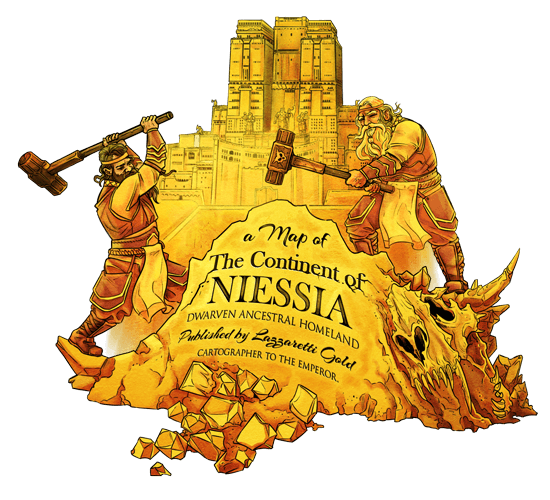