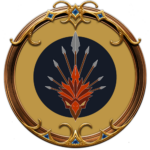 Emperor Kordaava’s Imperial Army consists of twenty legions. The 10th Legion, “The War Hawks” castrum is based at Enchantments Guard in the kingdom of Hesse.