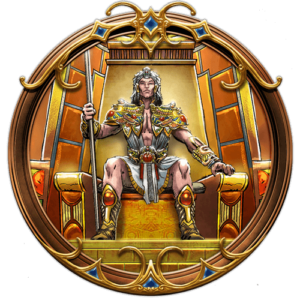 For a thousand years, no single person was powerful enough to bring all of Chaldea under one rule—that is, until the coming of God-Emperor Marcosta Kordaava, Demigod of Set. Kordaava ruled Chaldea for forty years until he was mysteriously assassinated.

The coronation of Kordaava as God-Emperor and his ascension to divinity by the deity Set is considered the most significant event in the last thousand years of Chaldean history, ever since the ancient war between the dragons and the dwarves.

While Kordaava’s campaign to bring Chaldea under his reign was ruthless and violent, his rule resulted in a golden age of peace, unimagined prosperity, a flourishing of culture, and worldwide law and order.

At an early age, Marcosta developed into a cunning and powerful warrior. The Kordaava estate in Hesse bordered the Garnon Forest, and Marcosta’s explorations and adventures in those enchanted woods are now legendary. It was during these years that Marcosta met his lifelong friend and companion, Hulsan, a priest of Set.

Kordaava as Soldier. Sensing Marcosta’s martial prowess, Siron and Leshka used their modest diplomatic connections to arrange for Marcosta’s acceptance to the Contubernium, a military school in the nation of Latium that was so widely recognized militaries from across Chaldea sent their best officers there to train.

Marcosta excelled in his training at the Contubernium, and his accomplishments there are well documented. Upon graduating first in his class, he was recruited by Bogoslav Tihomir, the Grand Prince of Roosh, as a high-ranking commander in the military.

Over the next two years, Marcosta Kordaava distinguished himself in Roosh’s campaign of conquest against the neighboring kingdom of Kazaktow.

Kordaava as Diplomat. After conquering Kazaktow for Roosh, Kordaava was appointed military commander of the two kingdoms and was given lands and a title in Saratof. In this capacity, Kordaava returned to Latium, where he had received his military training, to negotiate an alliance between Latium and Roosh for the stated purpose of conquering the continent of Tamica.

Kordaava reorganized the Rooshen military using the Contubernium model, with the Legion as a backbone of the military and the ability to command regional forces and mercenaries as auxilia units.

Kordaava as Conqueror. The combination of Latium’s military prowess and Roosh’s economic power under Kordaava’s military leadership was a lethal combination. Over the next few years, Kordaava conquered the entire continent of Tamica, establishing Saratof as the capital.

After conquering Tamica, Tihomir and Kordaava announced their plans for world domination.

And then they executed those plans.

These plans called for Kordaava to become emperor of the world of Chaldea with Tihomir retaining his authority as Grand Prince of Roosh and the Church of Set becoming the world religion.

Kordaava’s Coronation. Kordaava’s coronation as emperor took place on the first day of the astrological year and became the first year of a new, unified Imperial calendar. Literally, Kordaava was coronated Emperor on Year 0, Day 1. All the elite of Chaldea were in attendance.

The divine were in attendance as well. The deity Set of the Pantheon of Pharoahs personally crowned Kordaava emperor. As part of this ceremony, before a throng of thousands, Set ascended Kordaava to demigod, making Kordaava God-Emperor of Chaldea.

Kordaava as God-Emperor. Over the next forty years, Kordaava built the most spectacular world empire ever seen in Chaldea’s history, an empire spanning four continents, numerous islands both large and small, and a hundred kingdoms.

Kordaava allowed these kingdoms a great degree of autonomy if they would submit to his authority and to the Imperial standards of law, culture, and, of course, taxation. Kingdoms that acquiesced were able to retain their own royalty, nobility, land ownership, and military; kingdoms that resisted were assigned an Imperial governor, typically the legatus of the Imperial Legion stationed there, who retained absolute authority over the region.

In the Imperial capital of Saratof, Kordaava created a Senate comprised of important leaders from all across Chaldea. The Senate met annually to discuss international issues, mainly those regarding commerce and Imperials standards for law. From this body of several hundred senators, a body of twenty or so (depending on the year) was elected to a Council of Consuls for day-to-day administration of the Empire—all under the watchful eye of Emperor Kordaava, naturally.

The forty years of Kordaava’s rule were the most golden of all golden ages. Warfare became a thing of distant memory as an entire generation grew up in peace. With a well-articulated Rule of Law and equally balanced grievances process, Kordaava was able to dramatically increase the perception among the populace of fairness. Program after program of civic construction was pursued: bridges, aqueducts, canals, courts, assemblies, only to be trumped by a succession of grand civic arts that included monuments, hermitages, palaces, gardens.

As emperor, Kordaava exhibited great wisdom in accommodating various racial and ethnic interests. For example, in order to give elves and other fey a greater voice in the Imperial Court, Kordaava appointed a high elf, Ventiss, as Warden of the Forested Lands of the Empire and charged Ventiss with bringing Kordaava news of grievances that he might not normally learn of through the proper chain of command.

Kordaava as Lover. Kordaava never married, although he was engaged to be so. His sexual appetites were well documented, as a vast number of women shared his bed, several of who were openly favored courtesans. His first notable lover was Tinielle, a statuesque voluptuous genie from Elementari. She was known for her violent temper, indescribable beauty, and adventurous appetites. And while many men and women have made credible claims as offspring of Kordaava, the only one officially recognized by Kordaava was Princess Lian, daughter of Kordaava and Tinielle.

Kordaava was officially betrothed to Iltani, demigoddess of—and daughter to—Ishtar, ruler of Akkadia. After their high-profile engagement, however, their actual marriage never materialized. While the marriage was never officially cancelled, Iltani’s visits to Saratof became less and less frequent. Would they or would they not marry became a frequent court gossip.

With Iltani away ruling Akkadia, Kordaava had increasingly been seen in the company of a Tannaluvian heiress, Senator Sibyl Serrari. Kordaava and Sibyl both insisted they were simply lovers and that neither had a desire to marry the other.

Kordaava as Demigod of Set. In conjunction with his coronation and ascension, Kordaava decreed that Set would be the sole deity of Chaldea. In most of the world, this meant that worship of all other gods was strictly banned. Temples of Set were built in every city, and all other houses of worship were either torn down or unconsecrated and reused for other purposes. 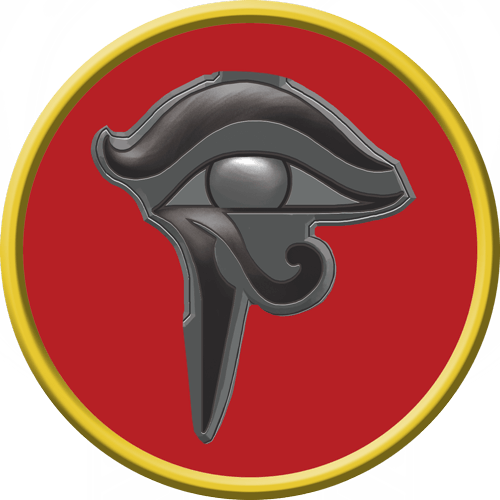 Kordaava recognized that some worshippers of other gods would be so devout they would rather die, even by torture, than forsake their beliefs. In admiration of their devotion, he decreed the city of Esh in Dorsang, would be a sanctuary for worshippers and priests of all other gods and cults. Another exception granted was for the kingdom of Akkadia, where Iltani, Demigoddess of Ishtar, reined. In Akkadia, the worship of Ishtar was also permitted.

Marcosta Kordaava's sir name is spelled with a double a ('aa'). When referencing the emperor directly and respectfully this is how his name is presented, "Kordaava". When referencing locations and organizations named in honor of the emperor, the name is spelled with a single a – such as Kordavan Empire, Kordavan Informant, and the University of Kordava.