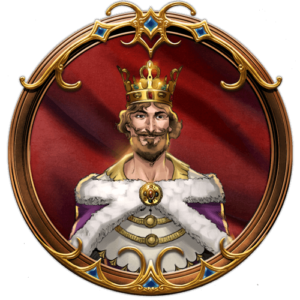 Gerhard von Rusdorf is the Konig of Hesse.

Gerhard only recently ascended to the throne. His predecessor and mother, Konigen Catarina, died recently, and Gerhard was the legitimate heir. Some thought her death was suspicious, which has cast a cloud over Gerhard’s ascension.

The Rusdorf family lives in their family palace, Rusdorf Palast, within the city walls of the capital city of Augstat.

The people of Hesse have mixed feelings about the Rusdorf line. The common people, who tend not to care about history, are generally supportive of their royal family. But those more educated know the Rusdorf family history isn’t all roses.

The Rusdorf name first appears in history in the form of a Hessen tribal chieftain, Tarter von Rusdorf, who violently and lawlessly deposed the first king of Bavarii, which was an early Hessen kingdom around Year –720. In this incarnation, the Rusdorfs did not stay in power beyond the death of Tarter.

Then, in Year –168, due to a political sleight-of-hand, the Rusdorf line emerged as the royal family of Hesse through marriage as part of the armistice that ended the Hessen Civil War. Over two hundred years later, there are still some who are upset about this.