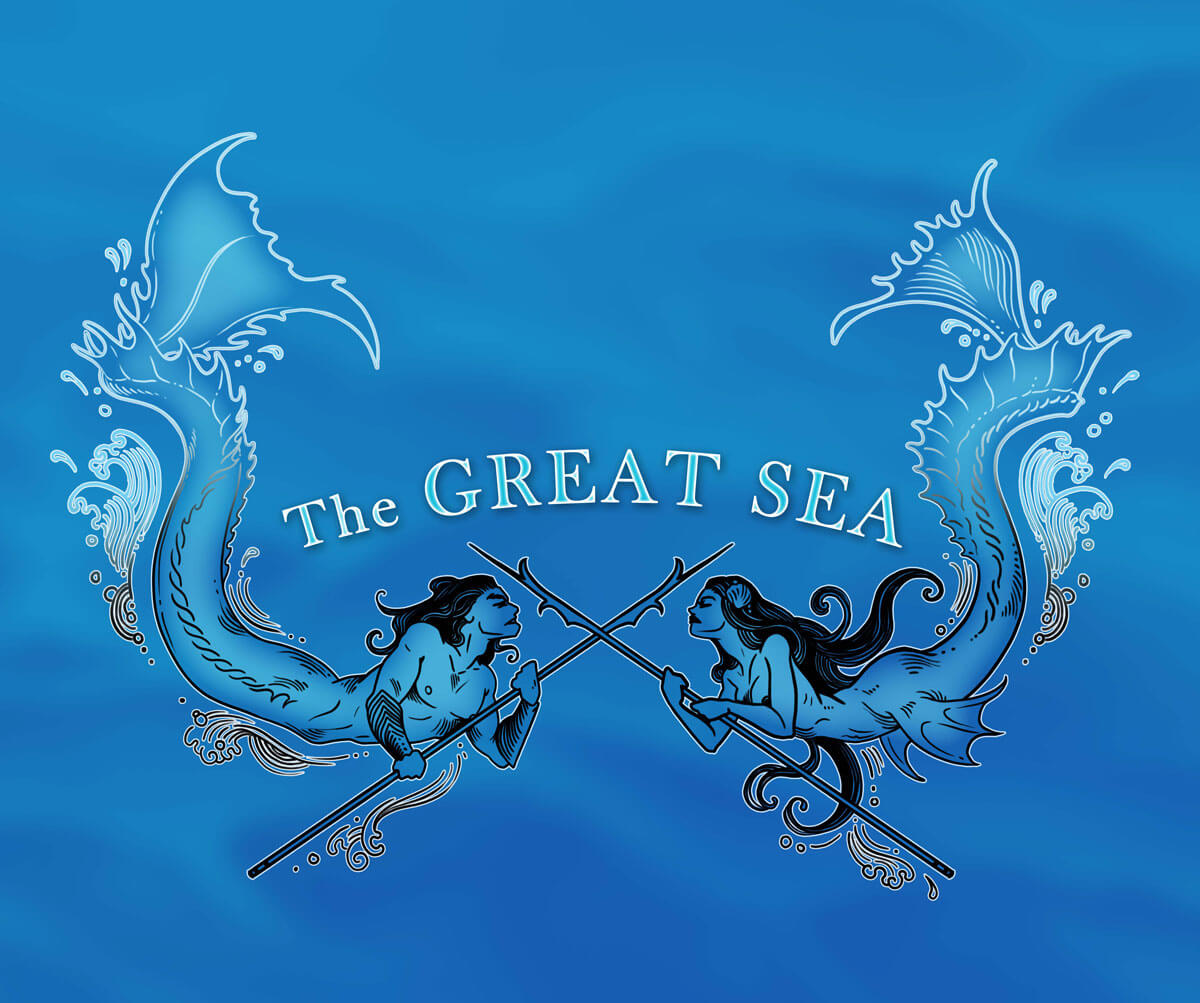 Chaldea is not a planet, moon, asteroid, or any similar sort of heavenly body.

Chaldea is a group of lands—continents, islands, and island chains—floating in a seemingly endless mystical pool of water called The Great Sea.

The Great Sea looks like an ocean and in many ways behaves like one. It’s sometimes calm, sometimes stormy, and it brims with aquatic life. At night, the anumian constellations, shine brightly while they dance and frolic across the sky.

But normal navigational techniques are of no use here. There is no magnetic north, and sextants would yield inconsistent results, for the land masses are constantly shifting locations relative to one other—and all attempts at discerning the patterns of their movements have failed. Some Chaldeans believe the whole concept of one land being east (or any other compass direction) is completely erroneous once adrift in The Great Sea.

Chaldeans don’t have “maps of the world.” They have maps of the various lands. And instead of using astronomy, ships navigate The Great Sea with astrology.

The anumian constellations, “the great spirits of the sky” reveal themselves at night. Spectacular in their beauty, they’re sharp and easy to spot in the broad heavens, their movements slow and fluid like a giant Lion’s mane jellyfish drifting gracefully on soft ocean currents.  Upon clear skies anumians are impossible to miss. Clouds, overcast skies, and stormy weather are the bane of ships making the task of spotting and following anumians difficult. Ships try to avoid inclement weather, for the obvious reasons, but more perilous than a hull breaking storm is getting lost permanently upon the Great Sea.

The 52 noble anumians movement patterns are consistent and predictable, (the basis for the Chaldean calendar year), but the lesser anumians, “visitors” are less predictable, chaotic even, their visits often short and end abruptly. A ship’s navigator cannot simply rely on the predictable nobles to pilot their vessel—confidence and trust comes with a broad knowledge base of the lesser anumians, (more the better), an understanding of their behaviors, proclivities and relationships with other anumians. Some of the sky spirits are attractive and inviting, while others are disagreeable and repulsive sparking animosity and even conflict. For instance, the Jackrabbit might sit casually on the horizon for days minding its own business until suddenly, Hawk attacks screeching from its hiding place amongst the cosmic currents. Baby Bear will pounce and tirelessly tussle with other anumians until the latter tire of play and seek solitude elsewhere. Mouse is shy and rarely seen outside of spring.

Ocean navigators use their collection of fate cards with fables, folkore, creatures and mystical implements to chart their course.

Navigation is linked particularly closely to astrology. Yet while captains follow the anumians, they do so in a mystical way, not a scientific one. Advancement in navigation means learning more and crazier fables, acquiring more bizarre instruments, and being wary of bad ethers.

Navigators’ maps do not follow XY coordinate system with sizes and distances to scale; rather, they show discordant land masses with anumians, strange symbols, astrological references, old sailors’ tales, and advice on what to do for good luck—like which offerings to throw into the sea at certain places, and so on.

To drive home the point, once ships are sailing The Great Sea, there simply is no way for their navigators to “scientifically” know which way is north. If they end up at the wrong spot, they don’t think “I made an error in my math calculations.” Instead, they think “Which anumian did I piss off?” or “Yakav must have fed the bullfrogs the wrong food!” or “Strange ethers influenced the divine winds.”

On small-to-medium sized ships, the navigator is also likely the captain. A large or particularly important vessel might have a fulltime navigator. The navigator’s cabin contains an eclectic mix of odd mystical instruments, bizarre creatures in cages, indecipherable notes written not just in Kordavan but with astrological symbols and mystical nautical notations. The cabin might seem like the strange, exotic lair of some crazy old wizard.

When a ship departs land, it does not immediately shift into some mythical place. The coastal waters act as one might expect—at first. But when ships sail out past the continental shelf, (some 20 miles or so (plus or minus)), they pass through an obvious transition from coastal waters into the mythic Great Sea.

In some places, this transition is relatively easy, like sailing into or out of the mouth of a river. In others, the transition is wild and violent, impassible. Competent ship navigators and pilots know, of course, where the best spots to traverse.

The time it takes to cross The Great Sea has nothing to do with individual lands or where one port is in relation to another. In fact, the idea of a “world map” is completely misleading. A world map of scattered lands implies distances, orientation, and relative positioning. Whereas a broken clock is right twice a day, a world map would not be correct, not even the once.

Arismarne, the Rubenstein astrologer in his book, The Great Séance: a nautical look at Anumian influence, noted, “While it’s easy to accept there is no grid north, or cardinal directions, it’s harder still, quite impossible to accept there, might not be, an up or down.”

“To comprehend the completeness of that which is the Great Sea is to master chaos and accept the impossible. Beyond the influence of land, the great boundless mystical sea is incongruity made harmony. Anumian spirits, agents of light and manifestations of might of a mystical celestial plane guide souls.”

If voyagers sail into The Great Sea on a seaworthy ship with a competent navigator, they can expect their trip to take about four weeks on average. The bulk of the bell curve is three to five weeks. It helps somewhat to have a fast ship; the fastest ships can shave about a week off this travel time. It also helps to have an intuitive and experienced astrologer who is equally competent in the skills of sailing (piloting, seamanship, etc.). That person can, on average, shave another week off the duration. So, the fastest ships with the best navigators can navigate The Great Sea in one to three weeks on average.

Some cities are easier to find than other, as they have prominent anumians that “haunt” them, hovering near. Port Facility is a famous example. This is the first port every navigator learns how to find because it’s the World Serpent’s favorite haunt. Given that he’s the largest anumian yet discovered, he is easy to spot.

Great Sea navigation tends to be geared toward a port city destination. Steering “a little to the left” of the Artisan will not land a ship “a little west” of Saratof. The crew might just as easily land in Kofin. Trying to land at some arbitrary stretch of coastline is much more difficult than following the tried-and-true astrological signposts.

There is some predictability. If there weren’t, even astrologists wouldn’t be able to do their jobs. But the routes from A to B shift with the astrological calendar. If a ship sails from Augstat to Argos and then the next night another ship sails from Augstat to Argos in a faster ship, the second ship will be taking a very similar route through the astrological influences and might catch up with the first ship.

There are also trade routes—city combinations that are relatively easy to sail between. Conversely, one city might be particularly difficult to find from another specific city.

It’s also tricky to use ocean navigation to sail from one city to another on the same continent. How can a crew sail to a place they’re sailing from? It turns out to be very difficult to chart.

Every 77 years “the anumain court” assemble, come together in the celestial Suzugos dance, an event of great astrological significance. During this period, the anumians act irrationally and navigation is impossible. Storms, earthquakes, and extreme tides plague Chaldea. Sailing during this period is tantamount to suicide.