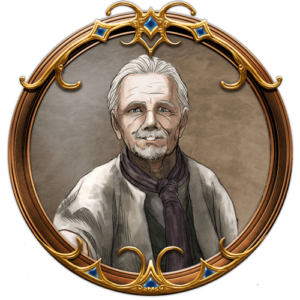 Duke was born in Year -42 and was not always a toymaker; he pursued many life paths before this one.

Born in the city of Augstat in the kingdom of Hesse, he was quite the rabble-rouser as a child. After Duke was arrested for brawling, a magistrate gave him a choice between a labor camp or the military. He chose the latter, and his talents led him to serving as a forward scout during a war with Somacia. He took his duties seriously, learning Somacian dress and language to the point where he could blend in and make local contacts. In essence, Duke was a spy in his younger years.

After serving his required time as a man-at-arms, Duke took a commission to continue spying in Somacia for the Hessen government. After witnessing a terrible act there, however, Duke had enough life of intrigue and returned to Augstat.

He then tried to make a living in various forms of arts, crafts, and music. He learned to sing, write songs, and perform in a series of musical troupes. He tried his hand at painting as well but discovered his real talent in sculpting and crafting toys. He also had one other talent—delighting the senses of a beautiful Hessen woman named Ann, whom he ultimately married.

Eventually, Duke was able to receive toymaking commissions from the nobility on a frequent enough basis that he opened a toymaking shop, Duke’s Toys.

ORGANIZATIONS
Member of the Artisan Guild of Augstat

Duke Seifried is an homage to the real-world “Uncle Duke” Seifried,
who began crafting zinfigurin soldiers in the 1960s.