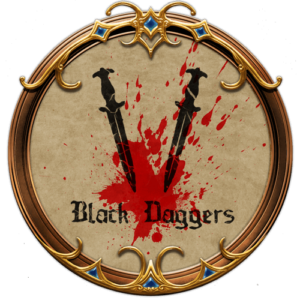 The Black Daggers are a notorious yet highly organized Hessen criminal guild operating out of the capital city of Augstat. Within the Boars Kreise district lies their central hub of operations, an underclass ghetto on the southside of the city. Rumor has it that select core neighborhoods are actually designed to appear poverty stricken in order to avoid scrutiny that might reveal the exceptional wealth hidden behind the façade. The Guild Headquarters is Black Dagger Hall.

The guild was founded and controlled by Pfalzgraf Lotari von Cronenberg, a Hessen noble who has been the face of the guild for as long as anyone can remember. Despite facing numerous assassinations attempts and hostile bids, Lotari has maintained his position against numerous challengers. In one instance, a host of body parts of von Cronenberg’s would-be assassin were delivered to the assassin’s employer—digits, limbs, even surgically removed parts of the assassin’s face: ears, lips, nose, eyelids. The assumption was that the assassin had been thwarted and murdered…until the rest of him was delivered, alive and stark-raving mad, to his employer’s front door.

No further assassination attempts were pursued for some time after this hideous warning.

The Black Daggers are best known for thievery, heists, and smuggling—they operate safe houses, warehouses (for the movement and storage of stolen goods), and training grounds throughout the city and deep into the countryside, as far away as the Garnon Forest. Their robust operations include petty thievery, burglary, plundering, extortion, tax evasion schemes, heists, (both minor and high profile), and smuggling of illicit contraband. They pioneered the smuggling of exotic wildlife and have been credited with the obliteration of the eco-system on the island Borean, where a lord unfamiliar with the hunting habits of the creatures he illegally imported was ultimately overrun and eaten by his purchases.

While robbery is their bread-and-butter operations, the Black Daggers allegedly offer murder-for-hire contract assassination to high-class clientele who can afford “white glove” professional hits. These can range from well-protected business operators to minor members of royalty to otherwise inaccessible targets. The reclusive bard Elicio Verdan is said to have been a victim of a Black Dagger hit after his play—White Knives—a thinly veiled mockery of the guild, debuted in Augstat.

As a secret society, the true size and scope of the Black Daggers remains a mystery and can only be guessed. Lotari manages the guild utilizing a flat management paradigm, with captains controlling independent operational cells and reporting to him directly. Only Lotari knows and understands all the business arms, purposefully keeping captains independently autonomous, so that members are blind and maintain plausible deniability when and if infiltrated by rival guilds and investigative government agencies. Even Delevan Tak, the infamous informant who turned coat on the Black Daggers in exchange for immunity and secret deportation, was unable to divulge more than a few areas of the guild’s operations before his murder.

A list of Black Dagger members has never been published or seen (at least no one can attest to having seen such). A rumor within the guild that seems to gain veracity and virility with each passing year alleges that Lotari once consulted an Anumian Seer to implore Schemer to provide the Black Daggers cover and ultimate secrecy, the result being that no Black Dagger member’s name shall ever appear in a list. Whether this is true or a favorite barroom tale—or possibly even an obfuscation created by Lotari to bolster hitherto successful Black Dagger conspiracies—no one can say. As of yet, however, a comprehensive Black Daggers membership list remains Hesse’s white buffalo.

Ethnically, the Black Daggers members appear to primarily be composed of a mix of humans and halflings. Women form less than 25 percent of the overall membership, though six of the top ten assassins in the guild are said to be female. Researchers continue to debate the classification of Sotaratos, the halfing said to magically change genders after each successful assassination in order to complicate pursuit by investigators.