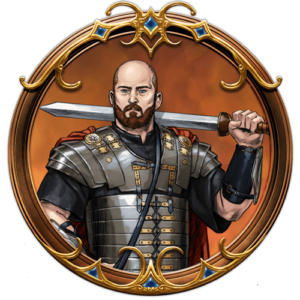 Gromov is a centurion in the 10th Legion of the Imperial Army. He is a human of Slavic ethnicity from the kingdom of Roosh, and has an unhealthy obsession collecting bows.

Gromov was born into a roving band of outlaw horse archers in the steppes of Roosh. His mother was a camp sex slave and his father, a murderer. When the outlaw band was finally brought to justice, his mother was sent to a temple, and his father was executed by impalement while Gromov watched. The seven-year-old boy was then sent to join the Voi of Prince Vojislav.

Strong and wild, a natural warrior, Gromov did well in the ranks of the Voi. He exceled in combat and horsemanship, but he especially shone with the bow. His great strength let him draw the most powerful bows, and he proved to have a steady aim under pressure. By the age of thirteen, he was assigned to Vojislav’s Druzhina, the prince’s personal retinue, where he was tutored by Iskra, the Prince’s bowyer. During his time with Iskra, she taught him about bows from all over Chaldea, and it was under her tutelage that his obsession with collecting bows was born.

When Gromov reached the eligibility age of sixteen, he joined the Imperial Legion. He applied to the officers’ school at the famous 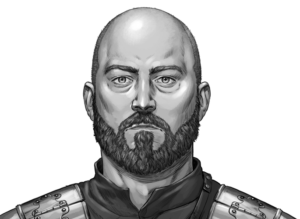 Contubernium in Latium but was rejected. So, he worked his way up the ranks the old-fashioned way—through brawn and persistence.

Gromov is portrayed by Andrew Staton