The term Pearl Universe was first used in the Rubenstein publication World Pearl Cosmogony, Guide to the Metaverse by the Hessen astrologer Arismarne -640, and in -229 taken up by the Akkadian astrologer Nabu Pabu’s Anumian esotericism.

Arismarne, chief founding member of Rubenstein and full practitioner is the acknowledged leading mind and authority on the Pearl Universe, cosmology of ages and anumian astrology.

In a lecture at the University of Augstat on the origin and evolution of the Pearl Universe, he said, “Imagine the universe as a pearl on a string. The string that runs through the pearl is time. The pearl slides along the string—let’s say from left to right. The two points where the pearl touches other pearls on the string are called singularities. As the universe travels along the string of time, the singularity on the right is creating new bits of the universe while the singularity on the left is destroying the oldest bits.” 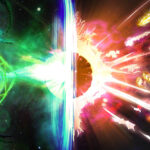 “Every eon or so, the fundamental nature of what the singularity of creation is creating changes dramatically. This change heralds the dawn of a new age. Each age begins with a cosmic shift—including portents of what’s to come rippling through the universe—and aggressively waxes in power while the age before it enjoys its full maturity, and the age before that wanes into decay, destined to be forgotten.”

Currently in our pearl, where Chaldea exists, the ancient era that still has some kick to it but is on its way to oblivion is the Age of Celestials, the era of space travel, psionicists, Tannaluvians, and Cthulhuian horrors. The age that is fully mature, now at its apex, is the Age of Magic, a time of magicians, dragons, fae, elementals, and the outer planes. The age that has recently (in cosmic terms) dawned is the Age of Gods.”

“Or maybe someone is simply taking the pearl of strings analogy too far.”