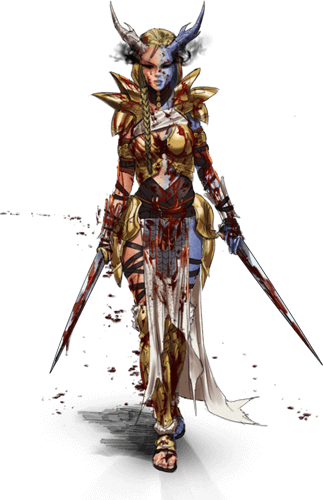 From a distance, helkyries look like exotically beautiful, well-muscled female warriors wearing elaborate metal armor and wielding weapons of war. They generally have blonde hair that cascades down their backs, and their skin appears alabaster-white and unblemished. Many warriors have, it is said, mistaken them for valkyries, much to their detriment.

On closer inspection, a helkyrie's true nature becomes apparent. Her eyes burn with a sullen red glow, her skin is dry, flaky, often scarred, and cold as that of a corpse, and her eye teeth are elongated into lethal fangs. Her hair is matted with blood, usually not hers, and sweat. A helkyrie's voice, which is often raised in savage laughter, is harsh and grating. She smells of carrion, and emanates a sense of demonic glee.

Helkyries are the same size as human women, but their strong presence and arrogantly dominant demeanor make them appear much more powerful.

Helkyries were created many centuries ago by the goddess Hela, a greater deity whose home plane is Hel. Hel wanted faithful servitors who would pervert the souls of noble warriors to corruption and take the souls of the wicked dead to her dark and icy halls. When she created the first helkyrie, the goddess knew she had the minion she wanted. Powerful enough to wrest the soul from even the mightiest mortal and eternally loyal to Hela, the helkyries are perfect for their task.

The helkyries call the plane of Hel their home, and this is where they can be found between assignments. Most of the time, however, the minions spend their time scouring the other planes for souls to pervert or steal. There are thought to be on the order of 10,000 of the hideous creatures in existence. When encountered outside of Hel, they can be found in virtually any number from one at a time to thousands, though they generally work in small groups except in the largest of battles. 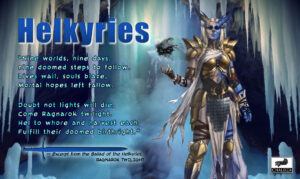 Helkyries have personalities one might expect of demons. They revel in death and destruction, and take infernal glee in warping the minions of nobility and virtue to treachery and malevolence. They love battle above all, preferring single combat with paragons of virtue, and joyously feast on the flesh and blood of those they have slain. They are totally loyal to Hela; after all, the goddess has given them free license to do what they most love, and will, in a pinch, support them against those who would destroy them.

Helkyries hate every manifestation of kindness and benevolence in the world, and claim to be able to unerringly scent these attributes in the blood of a mortal from a range of several hundred yards. They despise every creature not of their own hideous race, although they will grudgingly tolerate and fight alongside others who have dedicated themselves to the service of Hela Helkyries have their own perverted code of honor. They will never refuse a challenge to single combat issued by a minion of a benevolent deity, and will fight to the death in such a case, using every dirty trick in the book to make sure they come out on top. Otherwise, they are intelligent enough to recognize an

untenable position. Their hatred is even stronger- if that is possible-toward those who have defeated them in the past, and they will go to any lengths to exact vengeance on these foes.

The sight of a helkyrie in combat is hideous in the extreme. They are skilled with all weapons, and are ferocious in-fighters, using their claws and teeth. When In battle, they often shriek and laugh with demonic glee as they dismember their foes. If victorious, they loot the survivors for weapons and equipment, fighting among themselves for choice weapons and combat-related

magic items. Fighting ability creates a "pecking order" among helkyries. The most powerful have the finest weapons, often magical, and sometimes even of artifact status. The weakest of their numbers have to make do with mundane weapons.

Helkyries move as humans on the main plane, although their strength is such that they are rarely encumbered by their armor and equipment. They can teleport unerringly and at will, and can planeshift They seem to enjoy traveling and fighting on the astral plane.

Helkyries usually use weapons they have looted from the bodies of those they have slain. In close combat, they attack with their claw like fingernails or by biting. They always wear armor, again stolen from the dead. As with weapons, the strongest or luckiest helkyries sport magical armor, often of great enchantment, while the weakest must make do with mundane armor.

Helkyries are excellent tacticians, brilliant at small-unit tactics. Sometimes, however, they become distracted for a few moments by the appetizing sight of freshly dead flesh.

Helkyries have the ability to capture and store souls at the same rate as godlings. When any mortal strikes a helkyrie for damage in melee combat, there is a 10% chance that the mortal is irrevocably turned to corruption, assuming the mortal was virtuous in the first place. If a mortal succeeds in killing a helkyrie, the helkyrie's

soul leaves her body and merges with the mortal's soul, then flees to Hel. The mortal is left as a lifeless, soulless husk. Obviously, then, such a victory against a helkyrie is a Pyrrhic victory indeed.

The demonic battlecry of a helkyrie causes fear and perhaps even paralysis in mortal foes. This power is primally supported directly by Hel. 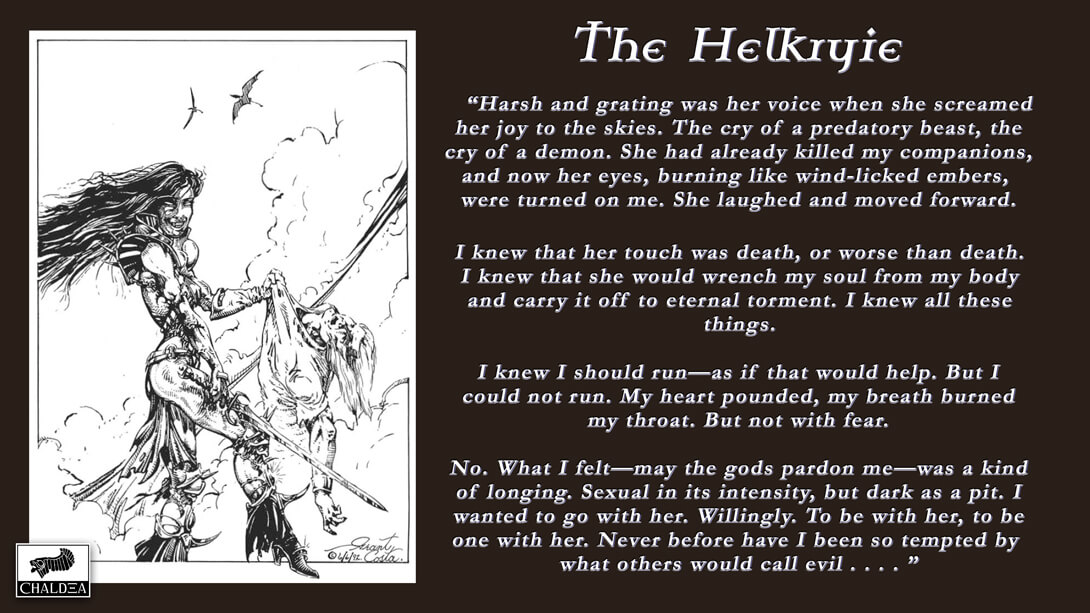