Drasildar are monstrous bipedal humanoids that tower twenty feet and more. Their powerfully built muscular frames are covered in a rugged cork skin, a thick bark like substance with spikey protrusions; when provoked they use as deadly bludgeon weapons. Around their broad thick necks flows a long rigid swamp grass like mane which varies in color from dark mossy green to a murky brown. Their chief defining characteristic, unique to drasildar physiology are the clump of blank, expressionless, enigmatic “eye” markings on their chest. No two drasildar have the same style eye markings, their size, shape, and orientation vary significantly. These mystery inducing eyes are the only method known, to differentiate the drasildar from one another. Usually even in count, (but not always so), drasildar typically have six to ten eyes symmetrically arranged on each chest pectoral. What are they for? No one has yet ascertained their function, (if any), adding further mystery to the drasildar puzzle. 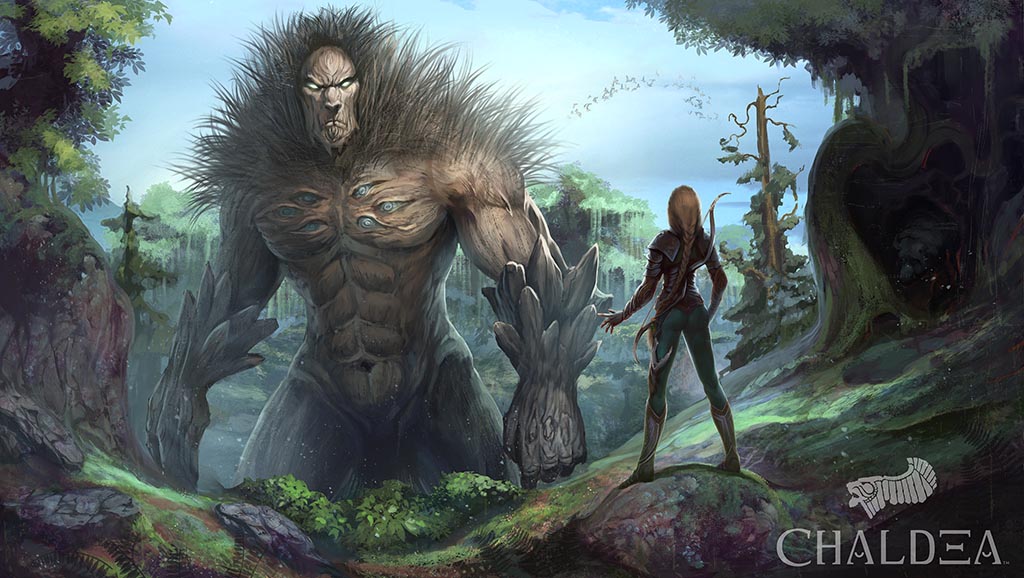 Extraordinarily little is known about the drasildar at large, beyond what is garnered by observation and viewable by the public these past four decades since Kordaava unveiled them. Are they male, female or asexual? They don’t exhibit any basic animal behaviors, they don’t eat, sleep, or vocalize, (that anyone has heard), beyond a savage roar when in battle. They only react to imperial instructions which primarily consists of stand guard tirelessly like granite. Anyone who gets in their way, either deemed a threat, or broaches the line of defense they are protecting are matter-of-factly crushed to gruel. They seem to take no pleasure or delight in killing, administering punishment with sterile precision.

Are they even alive or are they a creation, a living automaton? Emperor Kordaava has never volunteered an explanation nor entertained questions—it’s a topic, (it would seem), he would prefer to avoid.

“Mystery of the unknown is a powerful weapon,” said Lordint Durjak, the owner of Lordint’s School of Forging. “Not all weapons are forged of steel and magic. Emperor Kordaava has many weapons in his arsenal and he deploys them all ruthlessly.”

Origin stories are as plentiful as the anumians in the sky, offering colorful commentary as to where they came from: “Drasildar are distant cousins to the giants of Jotunholm”, “They were created in a Tannaluvian laboratory vat”, “They are divine creations, servitors of the god Set”, “The elder dragons brought the drasildar to Chaldea during the Claw Hammer War”.

“Most of recorded history was documented with beer in the hands of idle minds.” –Blaskar, Rubenstein full-practitioner.

The most accepted supposition amongst collegiate minds, the drasildar originated from the Swamp of Khonn, a region of the Garnon Forest along the coast, which would help explain their nickname, “Swamp Demon”. There is no proof they are either demon or even giant, both are adjectives in place of fact.

The drasildar are an enigma, before Kordaava was emperor, no one had ever heard of a drasildar. Who and what are they? Where do they come from? The Swamp of Khonn or someplace else? Possibly from a “Garnon clearing” or some other realm or pocket universe beyond Tartu’s skyscraping root where the veil between realities is thinnest. Only Kordaava can say and he has not.

What is known about the enigmatic drasildar has been garnered these last four decades since Kordaava dared take over the world.

The drasildar are an unstoppable force to all that behold them. And yet, it would seem, the drasildar have not collided with the immovable object. Kordaava rode their immense physical power to the emperor of the world. Even the elder dragons seem to fear the drasildar, their dragon fangs have shattered upon their bark skin like glass upon the world stone. In his drive to conquer and control Chaldea, Marcosta Kordaava, god emperor of the world has waded through armies with his drasildar guards, slain dragons by the bushel, drove demonlords from the Veil and if rumors be true, killed a godling or two. Even Jarl Kulbrandr’s mighty Tavjan lions eventually, once Kordaava put his sights on Danorum could not withstand the drasildar assault on their mountain citadel.

After Emperor Kordaava’s coronation, he transitioned the drasildar from offensive tool to defense. “The drasildar will defend my empire,” he said, as he sent them out across Chaldea to do his bidding.

There are one-hundred drasildar in total. Twenty drasildar stand guard over the Pa-Neck throne and act as the emperor’s personal entourage. Roughly forty are assigned to assist the imperial legions—one or two per legion— where they are prominently stationed as front door guardians of castrums and other important military installations. When legions are on the march, they are often seen marching in the vanguard to induce terror in the enemy. The remaining forty-or-so are less visible, positioned covertly around the world presumably at secret government facilities, protecting vital imperial assets, fortresses, banking and treasury infrastructure, prisons, political hotspots, and finally they act as first line of defense around the world, working tirelessly against chaos and supernatural forces bent on destroying Chaldea.