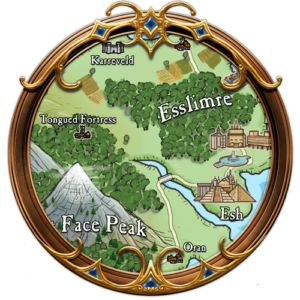 The Tongued Fortress is a legendary Dorian landmark, one of just a few Celtic ruins on the emerald isle of Dorsang that date back to the early decades after the Claw Hammer War. Conceived and built by a long-forgotten Formorian cult—when the Tuatha Dé Danann kings reigned supreme over the Dorian Isle—it is modest in size and scope by today’s imperial standards, but what it lacks in volume it makes up for in mystique and allure. Few who know its history do not doubt its legendary status is deserved.

The fortress façade (what appears at first blush to be an otherworldly mask hanging on the mountain side) depicts a grotesque monstrous face, hand-carved directly into the mountain granite; its brooding brow, sharp angular cheekbones, and square jaw jut out from sheer, indomitable cliffs; it seems to be the image of an angry Formorian giant standing guard over the valley, ready to rain ruin down upon any who dare enter. Hiding behind the twisted mask, deep within the rockface, resides the fortress’ interior galleries—an unconventional labyrinth of subterranean halls, rough-hewn chambers, and raw catacombs. Few visitors—and, at one time, even fewer prisoners—can find their way through without a guide. And no one ever offered guidance to doomed prisoners.

The bulbous, protruding eyes, once large ornate art-glass windows but long ago shattered or stolen, now stand empty, open to the harsh weather that sweeps through the valley. Rain and mountain runoffs pour unobstructed in and out of the empty eye grottos, staining the rock face, giving the impression that the face weeps.

Its mouth, which contains heavy-toothed jaws, is cocked sideways in a permanent savage snarl, and it doubles as both a defensive bulwark and gate entrance to the keep.

The fortress receives its rather unique name from an architectural oddity, an exaggerated long, twisting tongue that hangs from the gaping mouth down to the valley floor three hundred feet below. At first glance, the tongue appears to be a service ramp to the main entrance, but due to the precisely polished nature of the curved stone, it functions more as a vertical chute covered in centuries old slick moss and lichen. A constant flow of water (which increases and decreases with the seasons) cascades down the tongue, making it quite difficult, if not impossible, to climb.

The Tongue’s primary purpose, to the uneducated casual observer, would seem to be a simple garbage chute—one that carries unwanted refuge and filth away from the fortress. Historians and archaeologists, however, have a different theory, especially given how they doubt the ancient Celt Formorians who built the fortress would have constructed such a prominent, grand piece of architecture simply for taking out the garbage.

Instead, they point to an abundance of human bones that litter the valley floor, concealed beneath centuries of overgrowth, as evidence of a different purpose. They speculate it more likely that unwelcome visitors were tossed out the mouth entrance, cast unceremoniously or ceremoniously (as either the case might be) down the tongue, landing in a heap on the valley floor. No one knows if the victims were ejected alive or postmortem—possibly they were the remains of a Formorian meal or the result of a violent ritual, secular or religious in nature. Only history and the dead know. It’s considered possible one could survive the violent plummet down, though most would undoubtedly face great harm and almost as likely death.

A large four person lift cage is the primary and only known official access to the fortress. Mounted on the right exterior face is a human-powered treadwheel crane, designed for hoisting and lowering the cage. An unprotected narrow walkway—quite perilous and awkward for the average individual—traverses beneath the right cheek, giving the face a wicked scar when seen from a distance. The intended effect no doubt was intended to dissuade would-be visitors. The plodding three-hundred-foot trip up the lift would have given defenders ample time to pelt attackers or other unwanted visitors with rocks and arrows. It’s unclear if the lift were an element of the original Formorian construction or if it were added centuries later.

The Tongued fortress’ malformed visage is made all the more terrifying at night when it is lit by lamps and chamber fires from within. Then, the flickering flames give the mask a haunted, almost demented aura, one visible up and down the valley. It seems like a spirit scanning the valley for its next victim.

The Green Book of Ysbaddaden, the only known surviving copy of which is protected in the Ogham library in Dorsang, contains a cryptic passage describing Ysbaddaden Bencawr as the tongued Chief of Giants. Ysbaddaden was a Celtic giant, possibly a Formorian, known for his otherworldly size. Many historians believe this vague description stands as evidence the Tongued Fortress was fashioned in the visage of Ysbaddaden.

Ancient Dorians greatly feared the fortress and its series of occupiers over the centuries. The Tongued demon, like a custodian gargoyle, lurked upon the mountain side, moodily staring out upon the land, a dire warning for those who might venture close that it might be best to stay away.

The people of Dorsang and multinationals of Esh are today less fragile, less prone to flights of imagination and superstition; they respect the historical significance the Formorian juggernaut represents, a marvel of human achievement to both cherish and protect. There are still some, a silent minority though they be and fewer as time goes by, who harbor fears, terrified that human sacrifices are not destined to remain a barbaric artifact of the bloody past.

Though it is weather beaten and in disrepair after all these many centuries, many continue to believe that beneath its grizzled, haggard stone gaze the soul of a Formorian clan chief burns still and watches for his time to return.

The Tongued Fortress is currently owned and occupied by a Tavjan, a barbarian graver named Fortress Defender, or simple FD by those who know him.