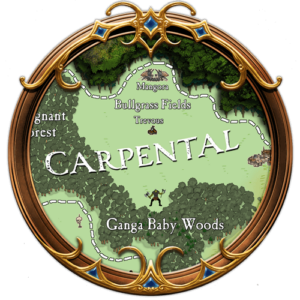 Carpental is a wild, unruly kingdom on the continent of Somarria. It is bordered on the north by Marn, on the southwest by Arusha, and on the southeast by Targonia.

The population of Carpental is roughly 40% human, 40% Marn Elf, and the rest a mismatch of other noble races, humanoids, and descendants of past off-world incursions through the veil, some of which have yet to be classified.

Carpental, along with Marn and Targonia, is ruled by an Imperial Governorship under Rittavich, the legatus of the 12th Legion, known as “The Mighty Lions.”  The castrum of the 12th is located at the Rock in Targonia, but a cohort of the 12th is stationed in Carpental at the fortress of Carperby, near the capital. This cohort is commanded by Tribunus Ektrik, of Rooshian descent, and a Xune demonologist. Ektrik rules Carpental for Legatus Rittavich.

The capital of Carpental is the port city of Trevous. Though a flow of legal trade into and out of Trevous exists, most of Carpental’s economy is built on the illegal trade of Marn narcotics, grafts, tattoos, poisons, and slaves. While there have been several serious attempts at controlling this trade, it’s akin to beavers trying to dam a raging river. Violence and corruption are weaved into the society’s culture at every level.

Very little is known about the history of Carpental. It has never achieved a legitimate degree of statehood, and outside the capital, the land is generally left to lawless clans of Marn Elves, drawn to Marn like moths to a flame, and barbarian tribes fleeing more powerful barbarian tribes from Arusha.

The most notorious Marn Elf clan is the Asmanar, who raise giant spiders to use in wars with other clans in which they take what they want from those they defeat, most notably slaves and drugs. Like other Marn Elf clans, the Asmanar also make runs into Marn to farm the spore mines located there.

Aside from Carperby, other notable keeps are Ellesmere in the south and Kettering in the west, both of which are used to protect Carpental’s borders against larger military invasions from neighboring Targonia and Arusha and against off-world armies that come through the veil—assuming they manage to get this far.

The largest legal industries in Carpental are hunting, trapping, and lumbering, especially in the southwestern region.