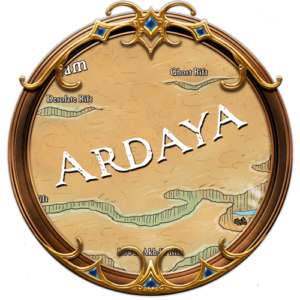 Ardaya is one of the largest kingdoms on the continent of Niessia, dominating the lands to the east of Niesse. Its capital is the underground city of Raqmu.

Dushara’s Bounty, a gigantic sandstone plateau, spans the western half of Ardaya. Little more than a rock crust, nothing can grow on what is considered to likely be the literal continental shelf. The hills and mountains of Niesse rise up from it, as if this plateau were its foundation, a country-sized shelf with mountains affixed to its surface.

Mighty rivers flow in deep gorges across the plateau. In these gorges, the Ardayan people endure a difficult existence, farming and herding in the bottoms of these ravines. These deep chasms and canyons are connected via underground passageways, of which even locals concede “only a few know them all.”  Entryways to this network are hidden in plain sight among a never-ending surface tableau of rock cracks and fissures. These passageways are used as part of an extensive trade network connecting Ardaya to the independent Nabatean Trade Cities on the coast, Mycanea to the north, and even the orc kingdom of Niesse to the west.

In spite of the limited sunlight that reaches the bottoms of these gorges, the land itself is quite fertile. The Ardayans credit Dushara, head of the Qurayshite pantheon, for having blessed this region. Most enthralling, one could travel the breadth of Ardaya and pass within hundreds of feet of tens of thousands of Ardayans yet never see even one of them.

At the eastern edge of this plateau is a drop of thousands of feet into a sea of sand called the Endless Desert. The rivers plummet out of the gorges and into this plain of sand, where water collects in its center; there, it is so hot, the water evaporates (or sinks into a large underground sea beneath the Endless Desert) as quickly as it flows into sand.

Three large yet shallow lakes called the Tears of the Trinity—so shallow, one can walk 50 miles across without getting wet above the waist—collect this water until it evaporates. Each lake is named after one of the female trinity of Qurayshite deities: from north to south, they are the Tears of Al-Uzza, the Tears of Allat, and the Tears of Manat.  Shallow-hulled boats connect the settlements on the eastern and western shores of these lakes with the caravan routes to Raqmu and to the Nabatean Trade Cities.