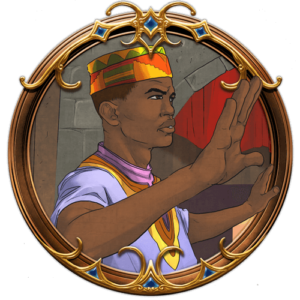 Kombo is a bard student at the prestigious Bardic College of Dorsang.

Kombo was born in Bukavu, the capital of Targonia, to a wealthy banker who specialized in world currency exchange. Born into affluence, Kombo was afforded an elite education few could dream of, and soon he took to reading and schooling like a bird to the sky.

Kombo had always been attracted to books of all kinds, especially adventure stories. By the time he was ten, he had a hefty library of his own lining the walls of his sizeable bedroom. While he was a hard-working, thoughtful lad, he didn’t always come by his books legally—he wasn’t opposed to a bit of petty larceny, convincing himself he would put the musty pages to better use and give them the love and attention they justifiably deserved.

When he was twelve years old, he convinced a neighbor friend, Njowga, to “borrow” a book from the boy’s parents; Kombo had always loved the story of Chaos Jack and the Forty Giants, and he longed to add the graver tale to his collection. In exchange, Njowga received a Targonian fig bar Kombo pilfered from the kitchen stores. Soon, other children in the neighborhood were regularly bringing Kombo books for fig bars and other desserts.

By the time Kombo was fourteen, his book collection had expanded beyond his room’s borders, and he was storing them in the guesthouse, which was suitable since it was seldom used. But that would not last—long about his fifteenth birthday, his father discovered his criminal enterprise and donated the expansive book collection, sword-and-sandal, to the local Library of Bakavua and afterward shipped the boy off to boarding school, where his disgraced son would learn stealing would never make a man rich.

Yet at boarding school, Kombo’s kleptomaniacal proclivity for collecting books began anew, and after graduating, he took his new collection with him to the Bard school in Dorsang.

Kombo is voiced by Lowell Deo