"You can call me, Boozer. Just not Michael." 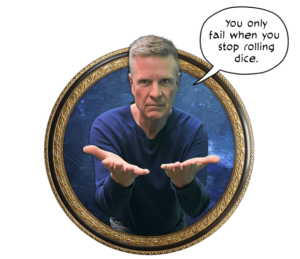 An Alaska native born and bred, Michael R. Boozer grew up in that great land of the midnight sun in and around Anchorage. For his first eighteen years, he was off the grid during vacations and long weekends as he stayed at his family cabin on Big Lake, where he practiced being a genuine real-life adventurer.

“He’s one of them rangers,” people would say.

“No, they didn’t actually say that,” Boozer says, shaking his head. “This isn’t a good start.”

Revision: He was considered to be a modern-day ranger equivalent, one who loved Alaska’s rugged beauty—working and playing in direct contact with the land through fishing, hunting, boating, and eagerly engaging in all manner of snow sports and outdoorsy pastimes.

Great. May we continue?

Driven by an insatiable desire to explore and a love of grand journeys, Boozer traveled much of Alaska’s southern coast and became well acquainted with the Kenai Peninsula and the Matanuska-Susitna Valley. Trekking Alaska’s pristine wilderness took him to places most people only saw through photographs or documentaries. Once even, in Tyrion-like fashion, he relieved himself from the top of a titanic ice wall.

“It was a glacier,” Boozer corrects.

“Don’t ever mess with a moose,” Boozer says, making devil horns with his fingers. “Lions might be the king of the jungle, but in Alaska it’s the king bull moose.” 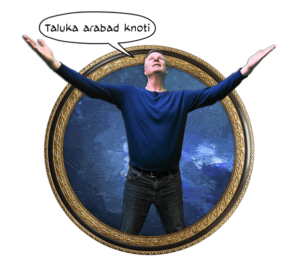 Should a Roland Emmerich-style doomsday event ever strike Earth—and if you’re Seattle adjacent—you’ll want to recruit Ranger Boozer. With many skill points allocated to survival, he’ll provide you with ample food, a dry shelter, and slightly above-average security. And at night, camped out by a cozy fire, if’n you’ve been good and haven’t pestered him to the point of annoyance, he might regale you with some of his crazy near-death adventure experiences—or more likely, a cockamamie Alaska-size fish tale, depending on his mood.

Yet of note: His many-greats grandfather, Erick Erickson, came to the United States from the old Nordic lands of Scandinavia on a Viking longboat with Leif Erikson.

Work with us. We’re trying to make your humdrum existence sound ace.

Okay, so…Jarl Erickson came to the Americas via the most common manner: by charter with his family from Gol, Norway, in 1830.  Even today, Boozer fancies himself a bit of a Viking in his soul or at the very least a long-lost Norse descendant who likes to believe his grandfather would have happily raided North America, given the chance.

If Boozer is, indeed, descended from the age of Vikings as many speculate he is, it would go a long way toward explaining why his blood boils with berserker rage when he watches his favorite NFL football team, the Seattle Seahawks, and why he identifies so well with the bloodthirsty Legion of Boom when they take receivers’ heads off going across the middle. 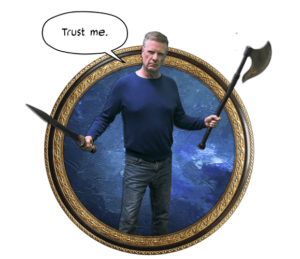 He’s been a dedicated season ticket holder since 2000.

“NFL football is a modern version of Roman gladiatorial games,” Boozer points out with a glint of sadism in his eyes. “Tigers, Bears, Raiders…mad screaming fans!”

We will not mention cardinals or dolphins.

Fast forward >>> After graduating from high school, thrall Michael Boozer (soon to be starving university student Michael Boozer) departed the exclave known as Alaska for a grand overland adventure to the land of falling waters, better known as the Pacific Northwest.  Specifically, to the Puget Sound’s very own Tacoma, Washington.

“One day, I was passing through the dorm lobby, and I see Hacker at a table with a bunch of other guys playing this game with books and strange dice,” Boozer says, explaining—

Yeah, yeah, nobody cares.  If you play D&D, it’s assumed someone introduced you.

… And in the master’s chambers,
they gathered for the feast
They stab it with their steely knives,
but they just can’t kill the beast…

Oh yeah, baby, D&D lyrics. We’ve all been there. 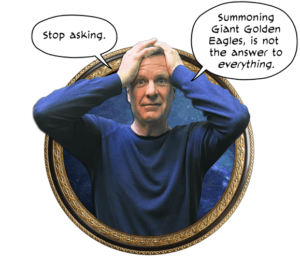 Boozer loved fantasy and science fiction literature and frequently read (and reread) most of the greatest works ever written in the field. Before the advent of the Internet and the proliferation of “best of” lists, fans were reliant on word-of-mouth recommendations, and as is common in most gaming groups, obtaining a new novel recommendation was as easy as borrowing dice for a saving throw. The pantheon of authors by those at PLU was, of course, led by Tolkien, (not Christopher; the other guy, John Ronald Reuel).  Boozer devoured books faster than a Cthulhuian horror chewing through a shattered mind.  After rising forth from the Tolkien baptism, he delved into the likes of Arthur C. Clarke, David Brin, Stephen R. Donaldson, Sharon K. Penman, Stephen King, Ursula K. Le Guin, Frank Herbert, and eventually that Game of Thrones SOB who refuses to finish his core series. (We love you, George, but finish the series already…please.)

“Make sure people know that I’m not a superhero fan,” Boozer points out while being interviewed for… whatever this is going to turn into.

“I don’t read comics. Growing up in Alaska, we didn’t have access to them,” he adds in defense of his indefensible position.

Okay, I suppose living in the final frontier, ye olde hardware shoppe didn’t carry comics. If you say so.

So yeah, apparently you cannot ask Mike Boozer what he thinks of the latest Marvel film or DC outing. He doesn’t know the first thing about Celestials or the enigmatic Watchers or how many times Jean Grey has died and been resurrected. And he doesn’t know the difference between Atom Ant or the Atom. He thinks Power Rangers are a Dúnedain rock band.

It’s a bio-roast! The next big thing.

So now we’ve established that Mike Boozer enjoys reading but has a Death Star-size lack of knowledge when it comes to comics and therefore can’t be anointed the all-knowing Padishah Emperor of the Known Universe.

While he cherished literature, there was something organic, almost tangible, about Dungeons & Dragons that touched his soul, inspiring him to create. (Consider this parallel: Reading an Alaska travelogue by John Muir also inspires and is educational, but it doesn’t have the visceral impact of traveling Alaska and experiencing its grandiose wilderness in person.) Such is the nature of books and games, at least for Boozer.

Our Alaska native had the same approach when it came to playing D&D.  He attacked roleplaying and eventually DMing with a gonzo journalism zeal that would have no doubt pleased Thompson.

Before he’d ever attended or even heard of a game convention, he and his college gaming group organized a roleplaying festival at PLU.

“It wasn’t so much a convention per se,” admits Boozer, “as a massive weekend of non-stop Dungeons & Dragons.”

It happened just the one time, attracting some three hundred devoted attendees, D&D enthusiasts one and all. Therefore, it shouldn’t come as a surprise that years later, he would work for Gen Con, the largest tabletop game convention in North America. 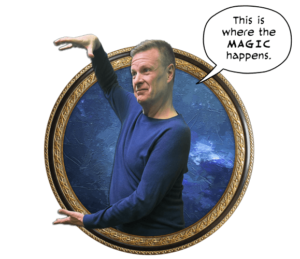 Boozer’s deep, lifelong love affair with Dungeons & Dragons and literature has not faded a single iota in the intervening years.

“Yikes! Has it really been that long?”

Look into the mirror, and don’t be afraid to notice how old you are.

“Don’t cite deep magic to me, witch.  I was there when it was written.”

By the way, shouldn’t you have a lordly gray Viking beard by now?

It’s true. He’s a bloody highlander—it’s rather irksome, you know?

With each passing year, as the rest of us in the mortal realm become gray and wrinkled, Boozer seems to defy age,  grinning with boyish gumption that invites you to punch him in the teeth out of frustration.

Today, getting together with friends huddled over a table for theatre-of-the-mind collaboration fills Boozer with happiness and joy—something he wouldn’t give up a single moment of for anything in the world. And when asked what his favorite part of D&D is, he responds without hesitation. “That’s easy. I enjoy world building and character development.”

While working at Wizards of the Coast as the Customer Service Manager, he ran official Pokémon tournaments, managed online Pokémon forums, playtested games in development (including 3rd Edition), played D&D with Peter Adkison and other founders of WotC, created D&D Web content, and wrote online articles.

He transferred his love of the genre into a career in the gaming industry. Over the years, he has worked at Wizards of the Coast, Hasbro, Gen Con—

“Please don’t bore the readers with my resume.”

His career in games has allowed him to scratch the creative bug that crawls incessantly around in his head. He’s happy to get up each morning, enthused by every aspect of world building—IP development, creating heroes and villains, crafting stories, world settings, character development, mystery, intrigue, politics, drama, and death.

Yum, the best ingredients for a fun-filled homebrew campaign, wouldn’t you say?

Lest you think everything in his world is fantasyland and games, however, Boozer is a rather accomplished chef—a few stars short of Michelin.

He enjoys wrangling up fixin’s in his metro Seattle home and enjoys hosting parties and sports gatherings. The largest event is an annual holiday seasonal celebration for which he’s well known that people wait for all year long.

(His close friends don’t get upset, or yell or throw hissy fits, when he’s out of town for the holidays, and the party is cancelled.  No, no. None of his friends would ever get upset over such a silly thing.) 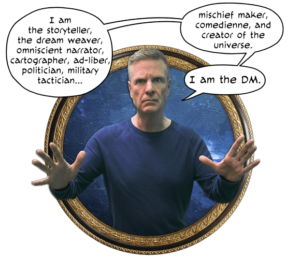 And though you don’t need to ask, he does, indeed, enjoy ice-cold hops & barley beverages and single-malt Scotch. And someday in Valhalla, he’ll enjoy mead, too.

If there is one thing Boozer loves more than D&D, it’s his dogs. Perhaps we have found his secret cure for anti-aging in his ever-present loyal canine companions. With the love of a good friend by your side, you’ll never walk alone.

Mike Boozer will be the Dungeon Master for Actoroke Series 3.